SQLFlow extends SQL syntax to allow SQL programmers, a.k.a., analysts, to invoke models defined by Python programmers, a.k.a., data scientists. For each deployment of SQLFlow service, we refer to the collection of model definitions accessible by analysts as a model zoo. A model zoo contains not only the model definitions but also the trained model parameters, as well as the hyperparameters and other information, which are necessary when we use the model for prediction and other analytics jobs.

This document is about how to define models and how to build a model zoo. For the conclusion, please go to the last section of this document.

The following example SQL statement shows the syntax for training a model.

The string a_data_scientist/regressors:v0.2 names a Docker image, inside which, there is MyDNNRegressor, a Python class derived from tf.keras.Model, and its dependencies. The WITH clause provides hyperparameters required by the constructor of MyDNNRegressor and the training process. The COLUMN clause specifies how to convert the SELECT result, a table, into model inputs in the form of tensors. LABEL identifies the field used as the label, in the case of supervised learning. The training process saves all the above information, plus the estimated model parameters, under the name my_first_model.

The following example fills in the column predicted_salary of the table employee for rows that represent employees recruited in and after 2019.

Users don’t have to write the COLUMN clause in the above example, as SQLFlow reuses the one in the training statement.

The above training and prediction example reveals some concepts related to models.

In SQLFlow SQL grammar, the identifiers after TRAIN, USING and INTO have different meanings:

We can use version management tools like Git and release engineering tools like Docker and save the trained model with a unique name. Here follows our proposal.

Model developers can have their own Git repository or other code version control systems to store the code of model definition Python files. The Python code files should be put into one directory as a Python package, then write a Dockerfile under the root directory for building the image:

Here is a template of what the Dockerfile should look like:

Build and Publish the Docker Image

When the model developer needs to publish the model for SQLFlow to use, they need to build the Docker image and push the image to a central repository.

Use the Model Definition in the Docker Image

Then the generated workflow will use the Docker image a_data_scientist/regressors:v0.2 to run the statement. In this step, SQLFlow will generate the training Python program inside the Docker container and execute it. Once the job completes, the trained model together with hyperparameters, Docker image, evaluation result and the SQL statement used will be saved. So in one trained model, we can have:

We propose the following extended SQL syntax for analysts an_analyst to publish her trained model.

Then, another analyst should be able to use the trained model by referring to it in its full name.

We describe the details of how to implement models.sqlflow.org in model_market.

After all, what is a model zoo? A model zoo refers to all the model definitions and trained models accessible by a setup of the SQLFlow server. It contains one or more model definition Docker images and the source code repositories that build the images. It also includes the model zoo table configured to work with all submitter programs generated by the deployment.

If another analyst wants to use the trained model, he would need to use the full name as an_analyst/my_first_model.

Use a published model make some predictions on new data:

Use a published model to train on a new dataset:

There are three roles in the ecosystem of SQLFlow: 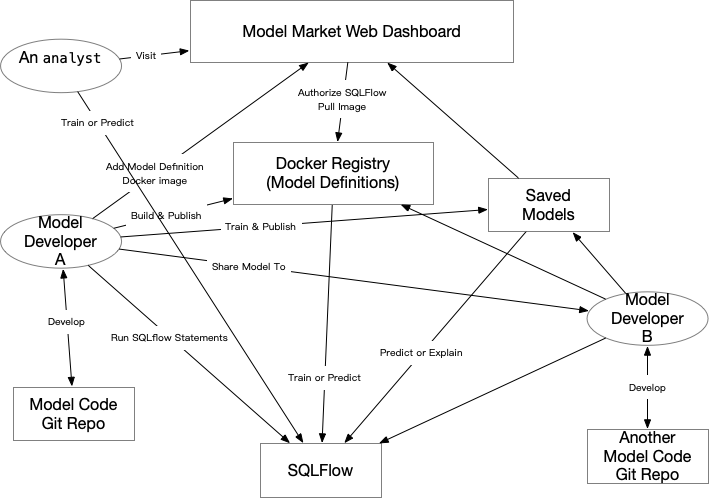 The class DNNRegressor could be in any file in any directory of the repository github.com/a_data_scientist/regressor. The only requirement is that when the submitter program trains the model, it can run a Docker command, or an equivalent Docker API call, to train the model.

A trained model could have its name in any of the following forms: